On the night of January 14, 2021, Samsung’s latest flagship S21 series was released, including the S21, S21+ and S21Ultra, which are still available in Tall, Grande and Venti sizes.
In terms of battery capacity, the three models are 4000mAh, 4800mAh and 5000mAh respectively, and the S21+ has a slight increase compared with last year.

Seems too conservative when it comes to charging, even…
A little backward, the three new phones all support 25W wired fast charge, 15W wireless fast charge and wireless reverse charge, while Samsung also actively responded to the environmental protection policy in the accessory, no longer with the charger and data cable.

On this occasion, let’s review the development of battery capacity and quick-charge power of Samsung’s flagship S and Note models over the years.

The original Samsung S was unveiled in March 2010

In 2010, it is the world of physical button phone, the old mobile phone giant Nokia is still standing in the market.
At that time, Samsung launched the original Galaxy YS phone. Its 4-inch SuperAMOLED screen, 800×480 screen resolution and other hardware made this phone quickly popular in the market and became one of the few models that could compete with the iPhone at that time.

With a 4-inch screen that was rare at the time, it had a 1500mAh removable battery, presumably with a charge power of 3.5W.

In July 2011, a Samsung S2 with a larger screen was unveiled

Samsung’s GalaxyS2 has increased its screen size to 4.3 inches on the original S model, with the same 800×480 resolution.

Battery capacity has been upgraded to some degree due to the larger screen size. Samsung GalaxyS2 has a built-in 1650mAh battery, which is estimated to have 3.5W of charging power.

Note series positioning business flagship, such positioning from the original Note series models have been reflected.
At a time when smartphone screens were around 4 inches, Samsung’s Note1 had a 5.3-inch screen, a 1280×800 resolution, and the most important feature of the Note series: the pressure-sensing stylus Spen, which is still in use today.
Due to the increased screen size, it also has a 2500mAh removable battery, which still uses a microUSB charging port and is estimated to have a charging power of 3.5W.

The launch of the S3 has been well received by the market, sales have continued to soar, and Samsung has also generated very substantial profits.
Compared to the S2, the S3 has a 4.8-inch screen with a resolution of 1,280 by 720.

In August 2012, Samsung’s Note2 was released, and the screen continued to grow

In August of the same year, Samsung launched an updated version of the Note2 during the Note series, which continued the positioning standard of the business flagship and upgraded the screen from 5.3 inches to 5.5 inches.

There’s also a significant battery upgrade, with a 3100mAh removable battery and a MicroUSB charging port that supports 5W charging.

The Galaxy YS4 was a smaller upgrade than the S3, but it became the best seller at the time, with a 5-inch SuperAMOLED screen instead of a 4.8-inch screen, a 2,600mAh removable battery, and 10W of power.

In September 2013, Samsung NOTE3 was officially launched in Berlin, Germany. The front of the NOTE3 is a 5.7-inch SuperAMOLED screen with a resolution of 1920×1080.

In February 2014, Samsung’s S5 was released with support for fingerprint recognition for the first time

The front of the Samsung GalaxyS5 features a 5.1-inch 1080P SuperAMOLED screen with a 2,800mAh removable battery.

The S5 is Samsung’s first model to support fingerprint recognition, but it’s still a plastic case that has sparked a flurry of jokes.
In terms of charging, 10W fast charge is still supported.

In September 2014, Samsung launched the NOTE4 in Berlin, Germany. Different from before, the NOTE4 screen is not bigger this time, which is still 5.7 inches, but the screen is upgraded to 2K screen, and the resolution is raised to 2560×1440.
Samsung Note4 has a 3,000mAh removable battery, a microUSB charging port, and supports a 15W quick charge.

The GalaxyS6/ S6Edge has a double-sided glass design, and the S6Edge has a hyperboloid screen.
Both have 5.1-inch screens, 2K resolution, wireless charging and a 2,550 mAh non-removable battery.

In August 2015, Samsung Note5 was released with 15W fast charging and wireless charging

In June 2016, Samsung’s S7/ S7Edge was released with an upgraded battery capacity

In August 2016, Samsung Note7 was released, a turning point for Samsung mobile phones

In August 2016, Samsung launched the Note7, which has a hyperbole 5.7-inch design and still has a 2K screen of 2560×1440.
The built-in battery capacity of 3500mAh, support wireless charging and 15W wired fast charging, and due to the famous “blow up” incident and differentiated treatment incident led to the development of Samsung mobile phones in China began to decline.

In March 2017, Samsung’s S8 was released with the first standard USB-C port

It is worth mentioning that S8 series for the first time with standard USB-C charging interface, Samsung mobile phones since the full USB-C closer.

In August 2017, Samsung launched the Note8, which has two versions of Exynos8895 and Qualcomm Snapdragon 835 processor.
At the same time, along with the wave of all-screen phones, Samsung Note8’s screen is upgraded to a 6.3-inch 2K all-view hyperboloid screen, which has a very impressive visual effect.
Samsung Note8 has a built-in battery capacity of 3300mAh, which supports 15W wired fast charging and wireless charging.

In February 2018, Samsung’s S9 was released, with dual camera for the first time and unchanged fast charge

In February 2018, Samsung released the S9 series mobile phone in MWC2018. In general, compared with the S8 series, the upgrade is not big, especially in terms of charging. The standard charger is still 9V1.67A, which supports 15W fast charging power.
Samsung’s S9 has a 3,000mAh battery, while the larger S9+ has a 3,500mAh battery.

In August 2018, Samsung Galaxy Note9 was officially released, which is equipped with a 6.4-inch SuperAmol QHD hyperboloid screen on the front, and has two versions of the Snapdragon 845 and Exynos9810 processor hardware configuration.
Built-in 4000mAh battery capacity, support 15W wired fast charging and wireless charging.

February 2019: Samsung’s S10 is released, with a conservative 15W quick-charge

In terms of charging, the S20 and S20+ are still fairly conservative, supporting only 25W of wired charging and 15W of wireless charging.
As for the extra-large S20Ultra, the battery capacity has increased to 5000mAh, and the charging power has also increased to 45W. However, the standard device is still a 25W quick-charge battery, and users need to buy a high-power charger to achieve 45W quick-charge.

In August 2020, Samsung launched the Note20 series of new phones. At the launch, two models were introduced, namely Note20 and Note20Ultra.
All three models are powered by Qualcomm Snapdragon 865+ processor.

In January 2021, Samsung’s S21 series was released, with 25W quick charge support for the whole series

It’s worth noting that the S21 has a 4000mAh battery capacity, but only weighs 169G.
Charging aspects of the three models all support 25W wired fast charging and 15W wireless fast charging and reverse charging, and all do not come with a power adapter. 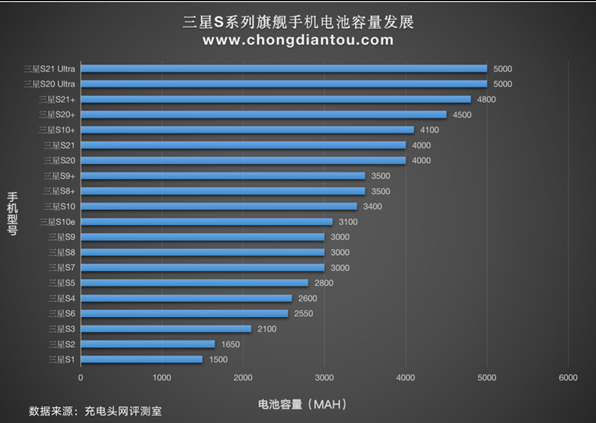 The overall upgrading trend of Samsung S series flagship phones is relatively gentle. It can basically be seen that the battery capacity increases with the updating of the model. The battery capacity of two Ultra models, including the latest S21Ultra, reaches 5,000mAh, which is the largest capacity segment among the S series models. 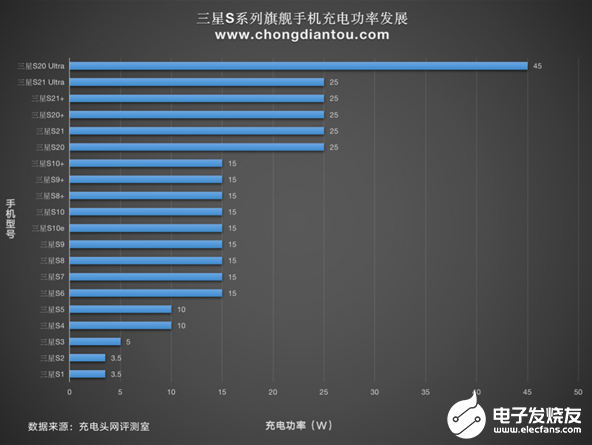 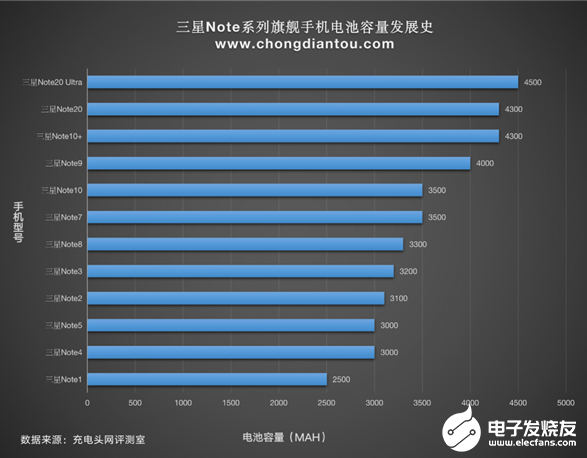 The battery capacity growth of the entire Note series is at a regular level.

It basically increases the battery capacity as the model gets updated. 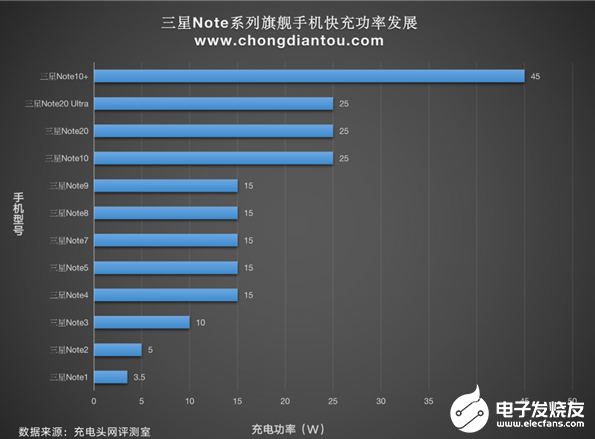 While charging is comparable to the S Series, the 15W Quick Charge lasted a long time, for reasons we all know.
The Note series currently supports the highest fast charging power of 45W, which is powered by Samsung’s Note10+.

Samsung, the king of the Android world, has not said much about the performance and screen quality of the phone, but it has been overly cautious when it comes to charging.
Due to the NOTE7 incident, the fast charging power of Samsung mobile phones has been stagnant for a long time. However, the fast charging power of models carried in the past two years has been slowly developed, but it seems to be just a flash in the pan…

The new S21 series has been released. Like last year, the S21, S21+ and S21Ultra have been released with a more conservative 25W quick charge, even the S21Ultra with the largest body size and the largest battery.
This is a step back from last year, when Samsung currently has a maximum power charge of 45W on its phones, both of which were released last year with the S20Ultra and Note10+.