For Apple in 2020, is an extraordinary year, for the first time in the autumn held three conference, issued a series of blockbuster products, regular update of Apple Watch and appearance, the great change of the iPhone 12 series, as well as the most important of the research of M1 chip based on Apple MacBook Air, Pro, as well as the Mac mini, whether it is for Apple itself or the entire sum of electricity industry is a big shock. 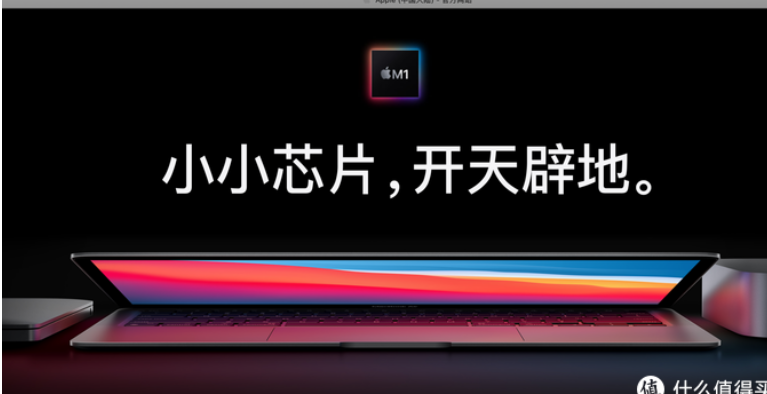 A series of actions of Apple are also practicing the concept of Apple, creating product ecology and using a full range of services.

Apple’s M1 chip is a big move, but there’s a difference. The introduction of the new MacBook has already changed the interface description to two Thunder /USB4 ports.

USB port is one of the most common ports in life, whether it is charging or data transfer.
But whether it’s charging or transferring data, A simple USB-A port also comes in many varieties.
Universal Serial Bus is the full name of USB, and the Chinese name is Universal Serial Bus. It was jointly proposed by Intel, Compaq, IBM, Microsoft and many other companies at the end of 1994.
USB interface is widely used, widely used in personal computers, mobile devices and other information and communication products, and extended to photography equipment, game consoles and other related fields, is also one of the most common interface types.

At present, the common USB-A interface internal white base, of course, there are other color matching interface.
It can be seen from the above figure that there are four contacts inside the USB-A interface, of which the two contacts on both sides are slightly longer, and the two contacts in the middle are slightly shorter.
This is because the longer contacts on either side are responsible for the power connection and the two smaller contacts in the middle are responsible for data communication.
So in principle, disconnect data transmission first when unplug wire, power off again, can prevent data damage.
The USB-A interface with 4 pins inside is also one of the most widely used and longest used interfaces.
There are still a lot of devices in use until 2020.

Then big companies like USB-IF and Intel pushed USB-A, and A new type of interface emerged.
The size of the entire interface remains the same, but the number of internal contacts has been increased from the previous four to nine, and the performance of the USB-A interface has been greatly enhanced.
The USB-A interface was developed early and was promoted by many technology giants, so it became popular quickly.
However, the USB-A interface is not perfect either. The interface is large in volume and does not support blind plug. Therefore, it is believed that many users need to try twice or even three times before they can connect successfully.

The emergence of US-C completely changed this situation, USB-C full name USB Type-C, also known as Type-C.
Is a new type of physical interface with specifications published by USB-IF, the USB standardization organization.
Compared with USB-A, USB-C has the characteristics of small size and support for blind plug, which completely solves the century-old problem of “USB can never be plugged in”.

Compared with USB-A, USB-C not only has smaller physical interface volume and supports blind plug, but also can accommodate more pins inside.
Due to the smaller size of a single pin, up to 24 pins, or pins full of pins, can be accommodated inside the USB-C connector.
The more pins you have, the more features you can achieve, which we will discuss later.
However, from the update iteration of devices and interfaces launched in 2020, USB-C will replace USB-A to become the interface type of the new generation of public popularity.

Because USB1.0 and 1.1 are so old, I’ll just skip over and start with USB2.0.
USB2.0 comes in the form of A USB-A physical interface. As mentioned above, the original USB-A interface had only four contacts inside for power and data transmission, and of course, the maximum output current was only 5V 500mA.

By USB3.0, the number of pins inside USB-A was increased from 4 to 9, and the charging performance was also improved, supporting A maximum of 5V 900mA charging, although the improvement is certainly not good enough for now.
This is why plugging the data cable into the USB-A interface of the laptop or desktop case is slow to charge, because the current is small and only at the level of charging.

The USB2.0 specification, which evolved from the USB1.1 specification, was introduced in 2000.
USB2.0 increased the speed to 480Mbps, or 60 Mbps, known as Highspeed. This protocol is the oldest standard in existence, and most USB-A interfaces will still be using USB2.0 in 2020.
It is important to note that the above naming conventions for USB1.0, USB1.1, and USB2.0 are reasonable, and the corresponding transfer speed standards are well understood.
Since USB3.0, transmission speeds have gotten faster and naming conventions have become more numerous.

In 2008, USB 3.0 was jointly developed by Intel, HP, NEC, NXP Semiconductors and Texas Instruments. It was launched by USB-IF in November 2008.
The release of USB3.0 increased the speed standard from 480Mbps to 5Gbps, or 625 Mbps. The speed was faster and the name was updated. The new USB3.0 speed standard is called SuperSpeed.
However, the name of USB3.0 was changed twice by USB-IF, the first time USB3.0 was changed to USB3.1 Gen 1, the second time USB3.1 Gen 1 was changed to USB3.2 Gen 1.
According to the USB-IF, the purpose is to unify the naming convention, but in the end, users will not be able to accurately tell which is the USB3.0 standard.
The name has been changed twice, but the transmission speed standard is still 5Gbps, which is the same.

In 2017, USB3.2 was released, raising the transmission speed standard from USB3.1’s 10Gbps again, and again doubling it to a maximum of 20Gbps, or 2500MB/s.
Well, yes, USB-IF has changed its name again, but only once, namely USB3.2 Gen2x2.
Again, despite the name change, the standard transmission speed is still 20Gbps, USB3.2.

Four, a new way of Apple and thunder interface

Compared with the development of USB protocol, the development of Thunderbolt interface is much simpler.
From the founding of Apple in April 1976 to the launch of Apple I in 1976 to the release of the first iMac in 1998 to the launch of the iPhone in early 2007, a series of actions by Apple show that Apple does not follow the trend in many cases, but stands out and leads the trend.
The reason Apple is mentioned in the introduction of the Lightning interface is because Apple is one of the creators of the Lightning interface.
The Thunderbolt connector is a word you often see when browsing Macs on Apple’s website.
In 2011, Thunderbolt, a collaboration between Intel and Apple code-named Light Peak, was unveiled.
Moreover, Thunderbolt interface integrates two communication protocols, PCIE and DisplayPort, so before full-function Type-C, Thunderbolt interface is a rare multi-functional interface that supports high-speed data transmission and video/audio transmission at the same time, that is, it has input/output functions of USB and DP or HDMI/DVI/VGA transfer at the same time.
And because its bandwidth reaches 10Gbps (Thunderbolt 2 is 20Gbps), it can be said to be a very advanced interface expansion technology, and such excellent performance is doomed to make Thunderbolt interface will lead the trend.

In the period of Thunder 1 and Thunder 2, the physical interface of Mini DP was basically carried on the MacBook laptop computer.
And there’s a lightning bolt with an arrow on the edge of the interface.
However, at that time, due to the scarcity of Lightning interface related devices, even if they were equipped with them, they were all on high-end devices. Moreover, due to the high price of Apple MacBook laptop, its popularity was not high among the mass user groups, and it was seldom paid active attention by user

In September 2019, the USB-IF organization released the USB4 specification. USB4 integrates Thunderbolt3’s advanced technology, directly delivers super-bandwidth data transmission capability, supports the same video expansion capability as the Thunderbolt3, and has a charging capability.
It can be said that a fully functional USB 4 interface is the most complete, the smallest volume, the fastest physical interface.
And downward compatible USB 3.2, 3.1, 3.0, 2.0, compatible with Lightning 3.

Six, one interface to go the world

A laptop is equipped with a port that takes care of charging, transmitting data, and expanding video, and can do all of these tasks with better performance, so far only the USB-C port is equipped with the USB4 specification.
The 100W power charge, 40Gbps data transfer speed, and the ability to extend the 5K resolution of the display also make it the most powerful interface available. 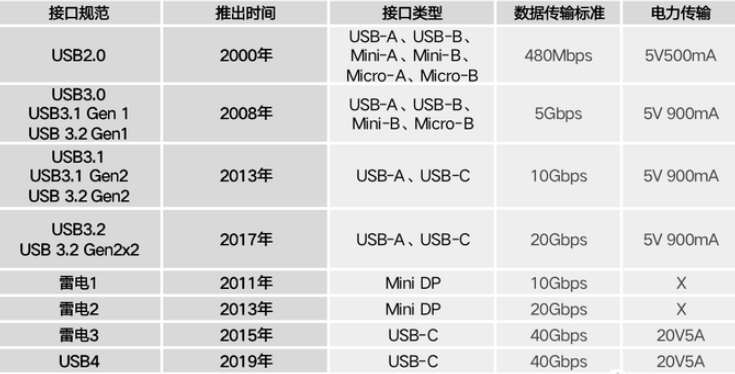 At the end of the article, let’s use a picture to understand the history of USB and Lightning interface standards. Because the original USB1.0 and USB1.1 are too old, they are not included in the statistics.
From the early USB2.0 to the latest USB4, from the Thunder interface to the Thunder 3 interface.
The reason for putting USB4 last in the table is that it is a trend towards a unified interface specification, which will accelerate the adoption of Thunderbolt 3 and enable more users to use the high performance standards of USB4.